Verna Jooste studied Jewellery Design for 5 Years at the Natal Technikon after she completed matric in 1986. She received her Higher National Diploma / BTech in Jewellery design in 1991. Jooste participated in her first group exhibition at The Flat Gallery, Durban, during her third year of studying. After completing a year as an apprentice she started to work in the Jewellery Design Department of The Natal Technikon and ever since 1993 she has been active in a educator role at institutions such as Johannesburg Art Foundation, The National School of the Arts, Media Tech, Imbali for the MAPP SETA, The Cape Peninsula University of Technology and currently at the Stellenbosch University, Visual Arts Department teaching jewellery and sculpture.

Jooste claims that she does not see herself as an “academic” even though she is continuously surrounded by academia, it is rather the case of seeing herself as a jeweler / artist who is the maker of things. Her time is devoted to creating and making rather than research with the end goal being a body of tangible work.

Through a period of 17 years Jooste have participated in 33 exhibitions. Two of these have been international in Lappeenranta – Finland and Prague. A solo and 5 other exhibitions at the Bag Factory’s gallery space, and others include prestigious events such as KKNK, Brett Kebble Art Awards, Sasol New Signatures and Volkskas Atelier. Part of this list include exhibitions at the Three Grande Dames – National Gallery, Johannesburg Art Gallery and Durban City Hall gallery.

Jooste works on public commissions, including work for The Constitutional Court, The World Summit on Sustainability, Faraday Market, The City of Johannesburg Christmas Tree Project and Red Bull. The commissions also include a Public Art Project in Lainsburg leading a group of 20 students to create and erect 8 public art works, this project was done with Kathryn Smith.

Other projects Jooste have been facilitating or/and organizing include projects by The Royal Opera House and Coscaland, based in the Netherlands, the National Art Council and the Department of Arts and Culture.

Not just always a participant in events and projects but Jooste have judged the Jewlex Competition at the Design Indaba and co-curated the jewellery section of the 2012 Design Indaba. Being an active maker and producer of works she has been commissioned by other visual artists for their exhibitions including South African artists like Brett Murry, Kathryn Smith, Hentie van der Merwe and Andrew Vester.

Verna Jooste creations can be found in the permanent collections of the SABC and Art Bank.

Most importantly Jooste considers herself to be “a practicing maker and strive to be an invaluable educator”. 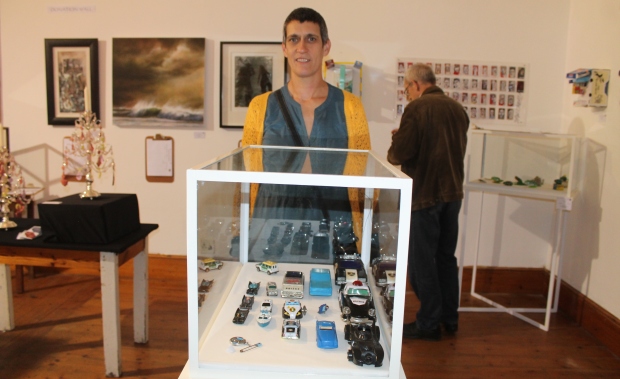